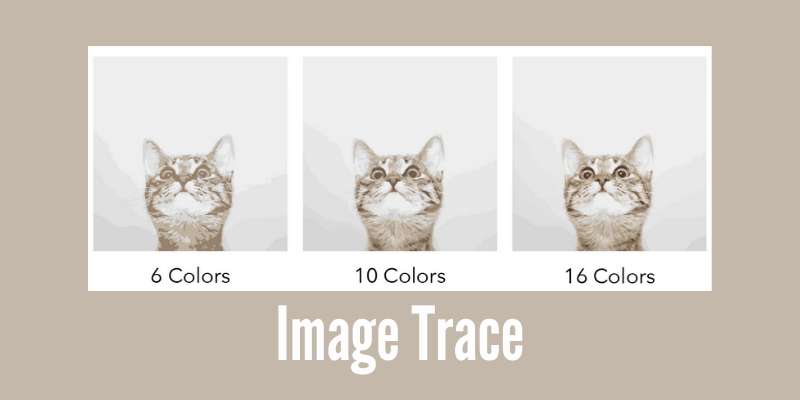 There’s an Image Trace option in Illustrator that allows you to turn hand-drawings and raster images into vector images.

Have you ever traced handwriting or drawings using pen and paper? The idea is the same when you trace in Adobe Illustrator. Another way to trace an image is to use drawing tools and shape tools to trace the outline of a raster image.

Many designers, including myself, create logos using this method. Trace the outline, edit the vector, and add a personal touch to make their work unique.

In this tutorial, you’ll learn two ways to trace an image in Adobe Illustrator.

Get your image ready and let’s get started.

I’m going to use this image to show you how to trace an image using Image Trace. It only takes two steps if you’re happy with the preset tracing effect!

Step 1: Open your image in Adobe Illustrator. When you click the image to select it, you’ll see the Image Trace option on the Quick Actions panel under Properties.

Here’s an overview of the Image Trace preset options and you can see what effect each option applies. Choose the effect that you like.

As you can see, High Fidelity Photo will vectorize the image and it almost looks like the original photo. Low Fidelity Photo is still pretty realistic and makes the photo look like a painting. From 3 Colors to 16 Colors, the more colors you choose, the more details it shows.

Shades of Gray turns the image into grayscale. The rest of the options turn the image into black and white in different ways. Personally, I barely used the Line Art or Technical Drawing options because it’s hard to get the right point.

Besides these preset options, you can also customize the tracing effect by changing the settings on the Image Trace panel. You can open the panel from the overhead menu Window > Image Trace.

For example, if you want to get a tracing effect between 6 Colors and 16 Colors, you can move the color slider to the right to increase the amount of color up to 30.

Let’s see another example of adjusting the Black and White Logo result. If you want to show more dark areas, increase the Threshold.

The preset threshold of the Black and White Logo tracing result is 128. You can see that the image doesn’t have too many details. I moved the slider to the right and this is what it looks like when the threshold is 180.

Now if you want to edit the image, you can Expand and Ungroup it to make changes.

When you click Expand, you’ll see the outline of the tracing result.

After you ungroup the image, you can select individual paths and make changes.

Too much detail? Only want to trace the outline of an image but the Line Art option doesn’t work? Check out method 2.

Method 2: Tracing Outline of an Image

You can use the pen tool, pencil, brushes, or any shape tools to trace the outline of an image. For example, this Flamingo image is already a simple graphic, we can trace it to simplify it even more.

Step 1: Place and embed the image in Adobe Illustrator.

Step 2: Lower the opacity to around 60% and lock the image. This step is make your tracing process easier. Lowering the opacity helps you see more clearly the tracing path, and locking the image avoids moving the image by accident while tracing.

Step 3 (Optional): Create a new layer for tracing. I do recommend tracing on a new layer because if you need to edit the tracing outlines altogether, the changes wouldn’t affect the image layer.

Step 4: Use the Pen Tool (P) to trace the outline. If you want to add colors to the path, you should close the path by connecting the first and last anchor points of a path.

Step 5: Use the shape tool, pencil tool, or paintbrush to work on some details of the outline. For example, the eyes can be traced using the Ellipse Tool to draw circles, and for the body part, we can use a paintbrush to add details.

Delete the background layer and fix the details if needed. You can edit the traced image and make it your own style.

If you want to make big changes to the original image, you can use Method 2. It’s a good way to start designing your own vectors and even logos.